Scottsdale, AZ – This morning was cool and windy.  I took off before sunrise to see if I could spot any interesting creatures starting their day or finishing their night hunts.  As the sun began to spread its light and warmth across the landscape, all was still except for the early morning bird calls. As I turned to start for home, a Black Tailed Jack Rabbit burst from behind a boulder and bounded off through the brush.

In our area, we see oodles of cotton tailed rabbits, but spotting the large muscular hare known as a Jack Rabbit is a little more unusual. Jack rabbits are actually not rabbits, but hares, and the two are completely different species. Jack Rabbits are fun to observe.  Jacks can jump up to 10 feet and run at 40 miles per hour! It is comical to see them bouncing over the landscape like a Loony Tune character.

Jack rabbits do tend to hang out in large open areas.  I have noticed that if I see one in an area, there are probably more and the abundance of rabbit droppings seems to confirm my theory. There are five species of jack rabbit found in the desert. Two of the most common are the Black Tailed and the Antelope.  Antelope Jacks are slightly larger and have ears edged in white, whereas the Black Tailed Jack has ears tipped in black as well as black on the tail, hence the name. 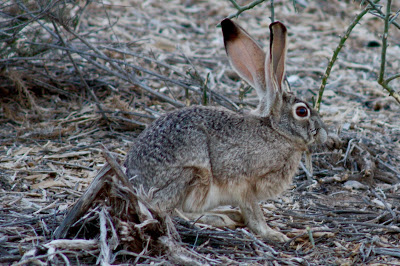 Jacks are known for their huge ears, which not only give them excellent hearing, but serve to help cool the jack by releasing heat from the large surface. The skin on their ears is very thin and full of blood vessels. During the hot part of the day, a jack rabbit will retreat to the shade where the slightly cooler air will cause blood vessels in their ears to widen, allowing more blood to flow to their ears.

Some of the resulting heat in the ears will move into the cooler air, ultimately cooling the hot rabbit too.  Interestingly, rabbits don’t pant and sweat as much as some other animals do, which helps to preserve precious internal fluid. The jack rabbit’s cooling system design is perfect for a desert dweller.

This week, watch for small mammals in open areas and washes. Let their hippity, hoppity, scrambling ways cause you to wonder. 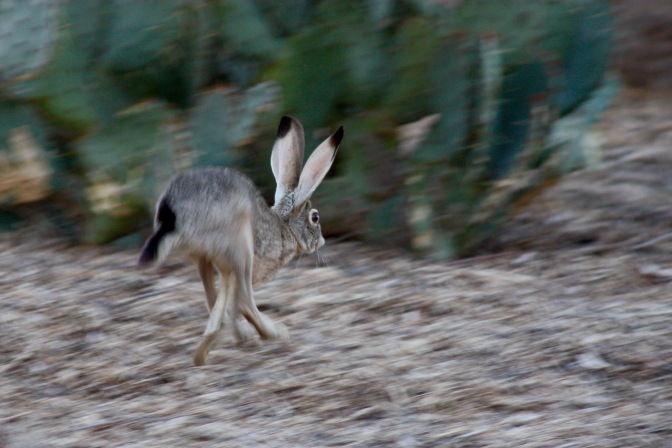 Wonderopolis – What is the Difference Between and Rabbit and a Hare?